The Evolution of the Office From the hierarchical structure of the 50s corporation, to the flexible workplace of the modern day, office design has evolved over time to meet the trends and needs of business and employees.

The start of a new decade marks a new era for the office fit out industry, leaving behind the old and welcoming a new chapter of improved design opportunities and trends.

With 2020 well underway, there’s no better time to reminisce on the evolution of office designs from timeless trends to passing fads and everything in between.

Work, lifestyle, and culture have evolved drastically over the past century. Advantages in technology have created workplace opportunities, with the shift becoming more evident over time.

Back in the day, formal attire such as a suit and tie would be an indicator of a corporate worker. It signified their status in the community, their occupation, and their financial earnings. Ultimately, dressing to impress your employer would define your career success.

Fast forward to the new millennial (early 2000’s), the roles and structure of corporate society have shifted. In the current day, a casual approach to work has challenged traditional culture and is merging the lines between work and play.

Not only do we see a shift in material culture, but also a change in structure. Employers are now focusing on designing their companies to attract and retain top talent by creating engaging environments, experiences, and systems that support their employees. The employers are now the ones dressing to impress.

To really understand how things have changed let’s step back and look at the evolution of office design over time, starting with:

1950’s
Early 1950’s offices were largely reminiscent of the rigid factory floor. Micro-management to ensure higher productivity was common logic. This was characterised by an open space where employees would conglomerate in a regimented formation, while the top dogs worked on higher, private levels watching over. To set the scene: employees used typewriters, filing was completed manually, and smoking inside the office was the norm.

After the war, the systematic layout was ditched and an organic, free-flowing approach adopted to encourage communication and collaboration. It was criticized for being distracting and chaotic, so office environments quickly experienced yet another design transition. 1960’s
As the workplace became hierarchical, the need for individual privacy became more prominent. The ’60s introduced the era of the cubicle farm. Cubicles allowed for employees to concentrate in a personal space, while still working in what was essentially an open plan layout. However, the walled desks soon proved a negative regression in the office design timeline. Human contact dwindled, sunlight was scarce, and identity was lost, creating an anti-social office culture.

1970’s
As society changed and the status quo became more commonly challenged, office culture was pushed to adapt. Work environments became relaxed, with extended lunches, frequent smoke breaks, and leniency in hours. Brighter, bolder colours, indoor plants, and practical furniture were introduced, hoping to abolish the ranking culture. With all the shifting and switching in trend and ideology, one element that remained was the open floor plan, proving to be a sustaining feature of the workplace environment through the decades.

1980’s
The introduction of the PC changed the movement of work culture forever. A new generation flooding the workforce brought a utopian dynamic. Power and decisions were no longer the sole discretion of top tier management; suddenly, all employees had a voice, empowering more responsibility and ownership within roles. Telecommunication and digital tools freed up physical space, allowing for a focus on modern aesthetics. Glass, concrete, and clean lines promoted the transition into chic, industrial-style environments. 1990’s
The ’90s saw a new era of technology, with the World Wide Web introduced, ultimately shaping every aspect of the working force. Open plan made a comeback, this time, not to create hierarchy but to aid collaboration and teamwork. Casual Friday’s were implemented, encouraging freedom in attire and a more laid-back culture for a range of industries. 2000’s
The new millenniums saturate the workforce bringing with them changes to the digital space. The consensus, in with the innovative technology and out with the hierarchy and systematic guidelines. Computers were thinner, phones were smaller, and emails dominated communication meaning less paperwork and more desk space. Entrepreneurial and revolutionary tech companies paved fresh opportunities for millennials, redefining the ‘conventional’ career and opening the door for new, unheard of jobs. The culture? Innovative, hustling and high performing with co-working spaces seen as a valuable feature in the modern office. Exposed brick, whiteboards, wooden floors and artwork were the rage, bringing a new aesthetic with the new century. 2010’s
Millennials have well and truly overtaken the workforce, bringing a new mindset of politics. Promotions no longer solely correlated with length of employment, but with the ability to adapt, improve, and lead within a role. Attitudes and values shifted, favouring flexible work environments, company benefits, and amenities over loyalty, status, and diligence. Well-being and work-life balance are the golden ticket to success, putting traditional work ethics out of trend.

The rise in start-ups and small businesses saw a drastic increase in co-working spaces. It allowed a company to rent a space, rather than buying or committing to long term contracts which proved to be extortionate. Sustainability and biophilic design were valuable elements to promote health and welfare in the office. Today
So, as we enter the new decade of 2020, we prepare ourselves for the physical and constitutional changes upon us in the office. We’ll continue to witness significant transformations in work environments and experience the competitive twist in career opportunities with companies focusing on appeal and retention of staff. A booming industry will emerge out of jobs that are unimaginable to us now, and the workplace will continue to mould to the physical and mental needs of human life. With revolutionary developments in technology and a fresh generation entering the workforce, the best is still yet to come for office design, culture, and sustainability. 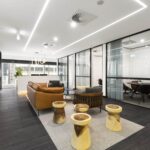 The future of the workplace,... 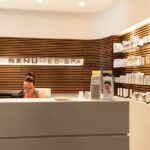 Bringing positivity back to ... 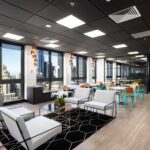 How to make workplace cultur... 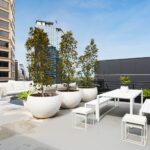 What will the workplace look...